A few weeks ago this was the last pose of the afternoon. For me it was just the opposite of  relaxed, uphill going all the way. 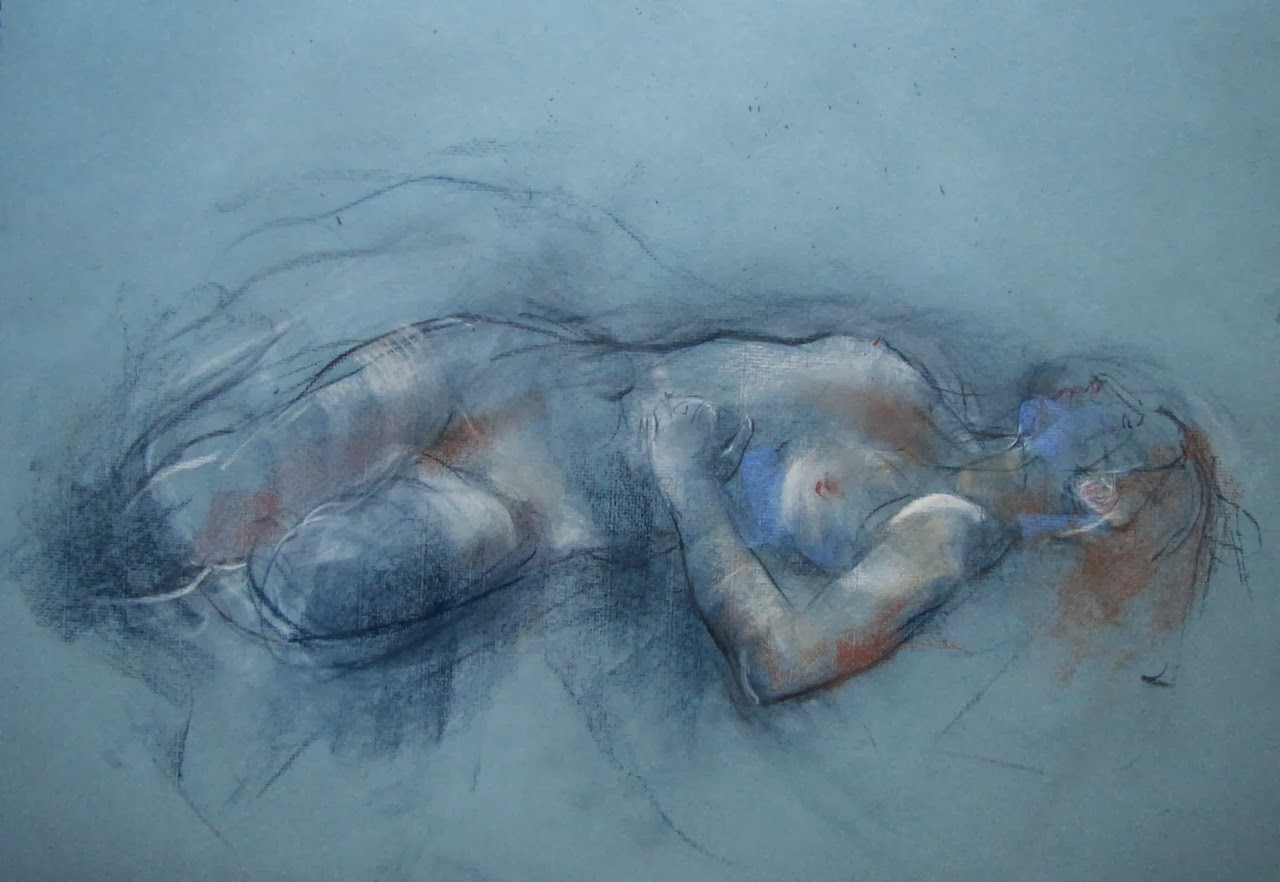 Forever and a day

Or this winter wonderland is here to stay - like the Gershwin melody 'our love is here to stay'
Nothing  grand - a lot of small adjustments, seemingly endless. 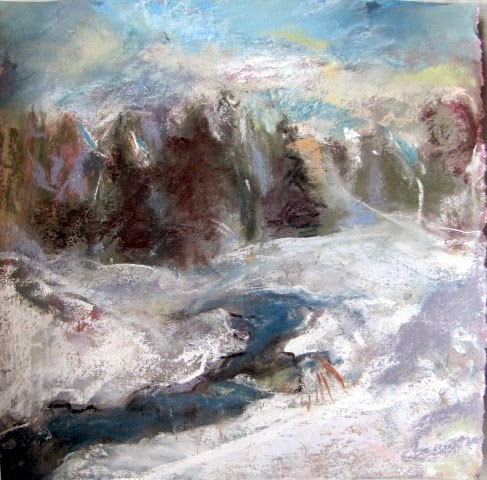 Forever and a day, color  pastel on Maidstone 10"x10"
mcohenlabelle©2014
In fact I love winter, I just hope there isn't flooding with snow turning into rain and if it freezes again I hope the wheels of our car don't get frozen stuck in several inches of solid ice like they did last Sunday. 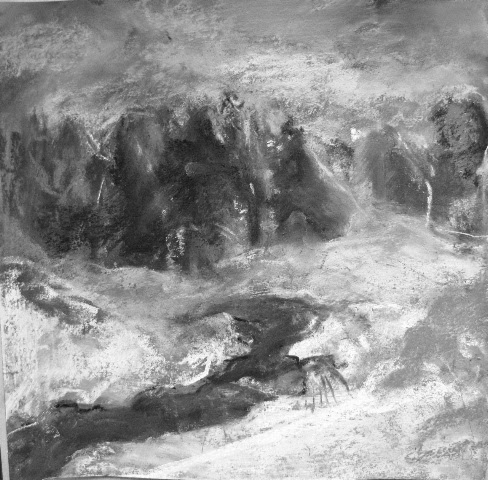 Forever and a day pastel on Maidstone 10"x10"
mcohenlabelle©2014 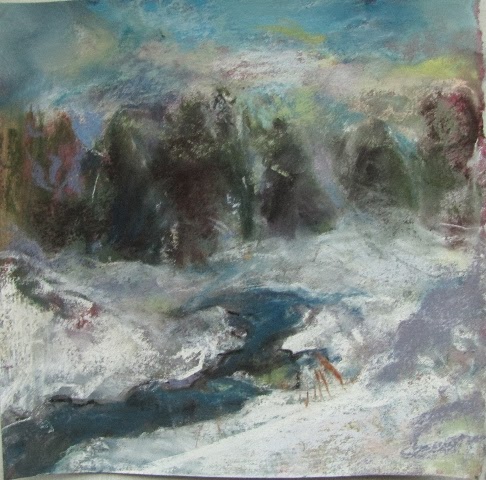 My hand warmer which looks like a large, oversize tea bag was still warm as I ate my dinner tonight and then clambered up the stairs to look at  the internet.

This pastel is from earlier in the afternoon not far from  Crooks Hollow Rd, where I planted myself  as firmly as I could on a deep snowy embankment with partial sun and particles of blowing snow.
The descent from the road was short but fairly steep and at one point laden down with stuff, I misjudged the depth of the snow, lost my balance and fell forward. Shirley said that at least I had something soft to fall into.
But she had an equally unsettling experience - I thought the wind sent her easel flying, but she said no, it broke. 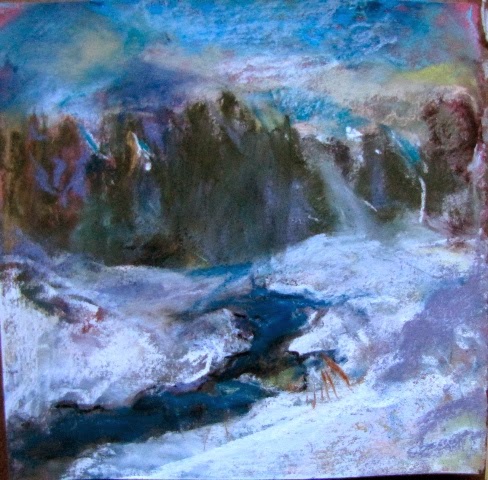 I went into my studio this afternoon to check on cobwebs and leakage and rescued this painting of a chair that is probably the same chair from studies in one of my notebooks. I did these years ago. 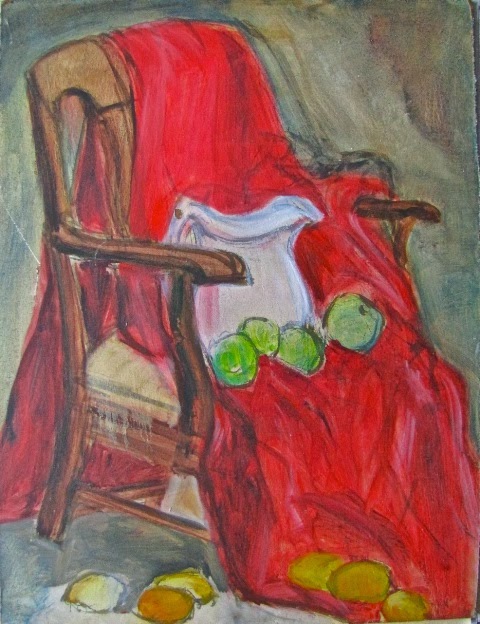 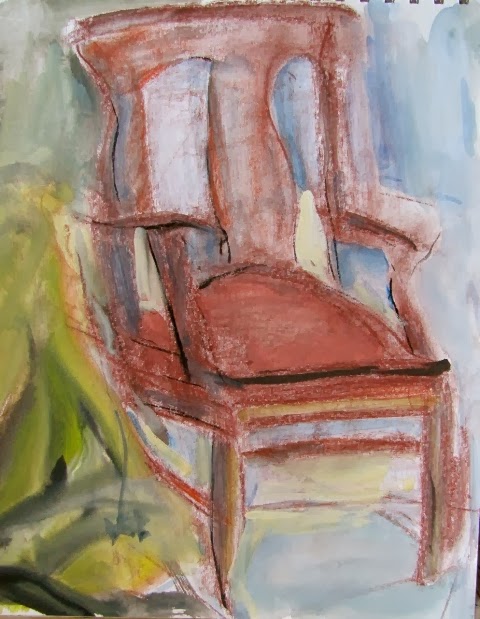 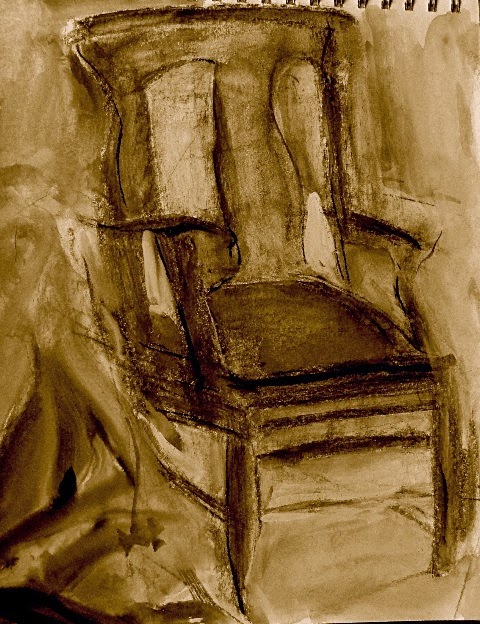 A different kind of light

In spite of the warming trend I only half dressed and instead of rushing outside to glory in the warming trend, I propped a drawing I had worked on last Sunday against a piece of furniture in my dining room and worked on it for over an hour. The challenge always  is that the model is absent and so is the combination of muted natural light and artificial light of the  3rd floor studio – in place of which I have the mid day light of my south facing dining room. Not that I mind but I do nevertheless have to be cognizant of that difference. Not that I wish to burden anyone  with that trifling detail, it’s enough that I burden myself.  Now I hardly sound sincere and that poses a different kind of problem – a peculiarity of character that I’ve had years of practice at. You know what they say – practice, practice, practice. 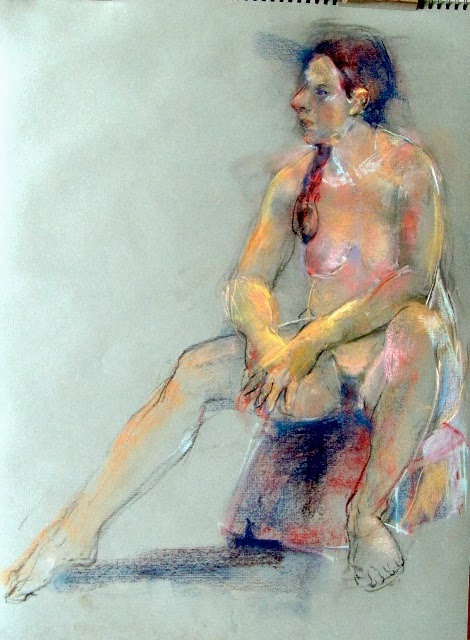 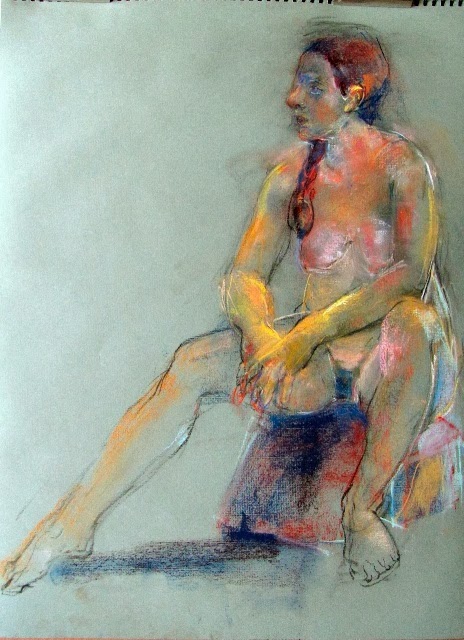 Not as cold as they said it would be, especially when the sun came out. Also I had a pair of hand warmers and although the expiry date read July of last year, lo and behold they still worked like a charm. Mind you I did bring back up warmers that were current.
I borrowed my husband’s camera to take a few photos but he forgot to put in the battery,  so that ended that idea. Now that there’s a warming trend I’ll try to get back there tomorrow or Thursday. 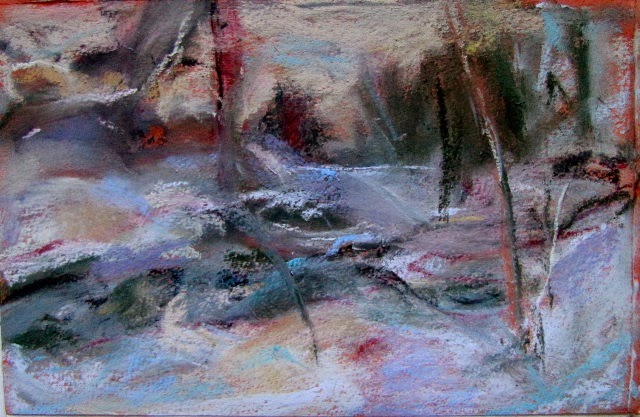 It might seem banal or unimaginative to call this drawing torn paper with respect to the fact that when I was removing the paper from the board, I managed to rip a small piece of it. 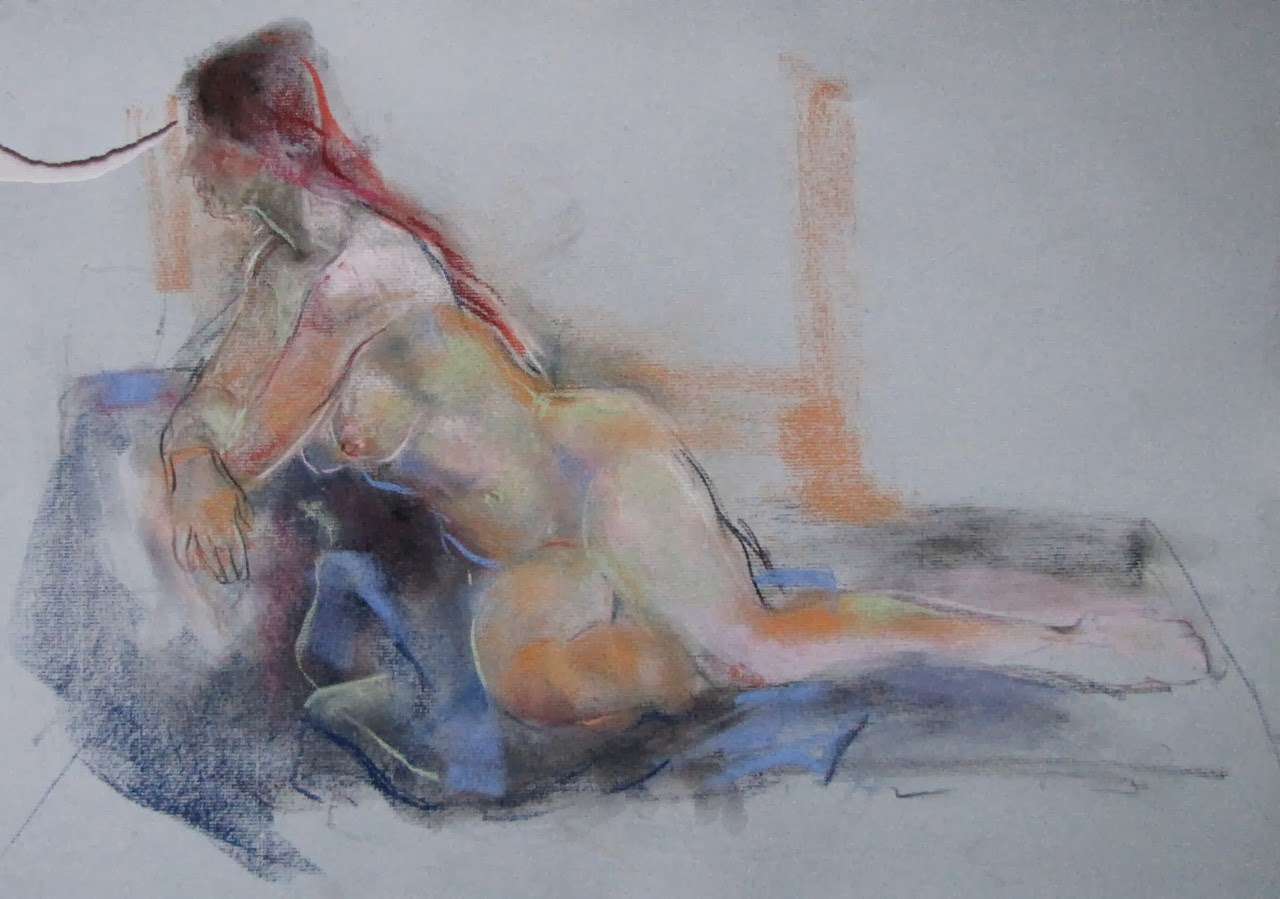 December 29, 2013
This was the last drawing I worked on at our open life studio before the end of last year.  The paper was very gritty, indestructible  – not the best to my liking – but I prepared it myself. Of course it comes in handy to blame the paper. The truth is I'm still fiddling. As my grandmother might have said, so nu? 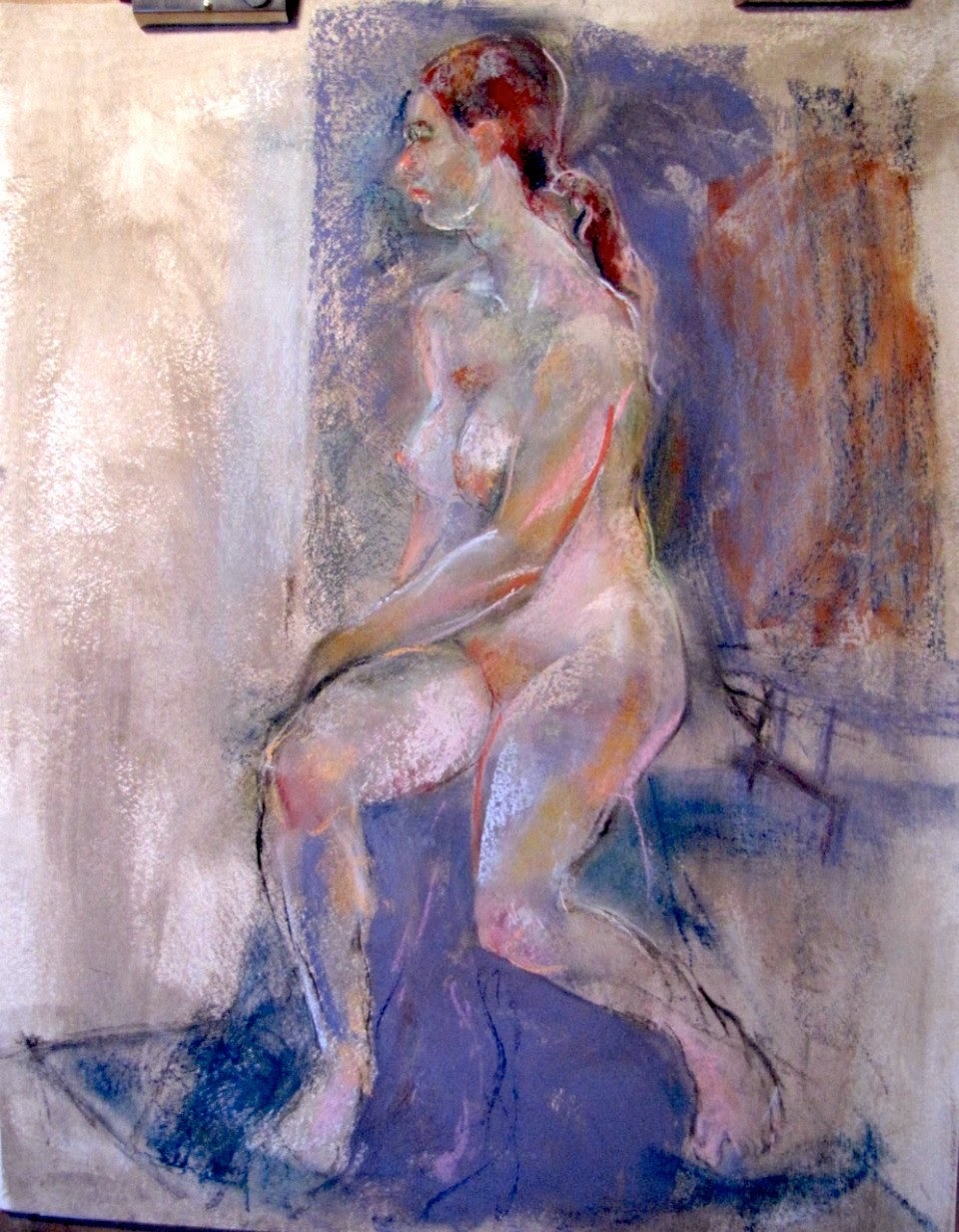 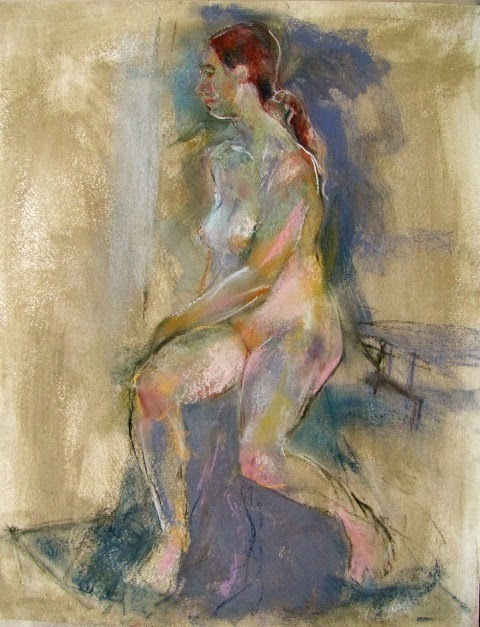 We said good-bye.  A few minutes later in the background I heard the gunning  of a motor, but paid no attention. When it persisted and got more desperate, I went to the window. It was our car. There he was with our neighbour, two shovels, a bag of salt, a few grunts and a push and eventually he left.
That’s the thing – there was snow over ice from yesterday’s topping. 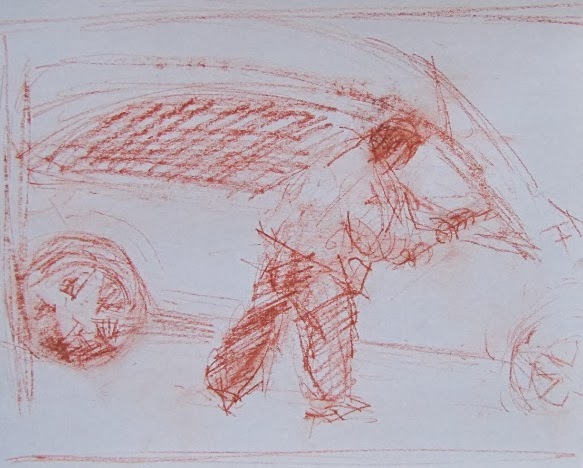 My friend Gershon once said, (actually more than once)  that because he hadn't painted that day he really shouldn't eat. I said somewhat alarmed, “Oh!”. I was very young.
This was said while we were already eating – both of us cabbage borscht and gefilte fish with horse radish. Really good menu at this restaurant, The Bagel, they generally drew a large crowd  (they made their own bagels  daily – huge),  near his studio on Spadina.
The owner of The Bagel, Benny, was short, bald head, white shirt and apron, wonderful man - a character. So was Gershon. Both were Polish. Gershon had a number on his forearm if you get the idea – but not Benny.
Every once in awhile Benny would fly off the handle – seldom really - but noticeable when he did. And his wife behind the counter would say quietly, “Benny, please.”  I commented about this, his anger. Gershon said that maybe he had a reason to be angry i.e. there was a cause - and how could I judge if I didn’t know. I waited for an explanation but there wasn’t any.
But back to Gershon and his painting/eating  thing – what made him say that? Was it guilt? Maybe he was just addicted to painting through the night and the bottle of vodka that went with it. I was much too young to know about things like being, driven etc – still don’t 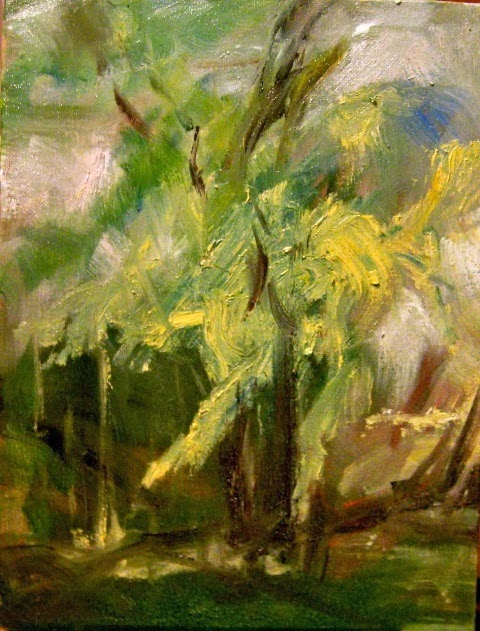 Incalculable risks on a slippery day

Last  Sunday morning was like a skating rink again.  When you stepped outside the ground was covered with a treacherous sheet of ice – sidewalks, roads, parking lots.  Old people as they walked to church to sing hymns, pray, worship  - took their time with cautious, mincing carefully measured steps – to slip and break something on their way to worship would be like a bad joke, worse – it wouldn’t do – for one, it would almost certainly disappoint their priest or rector, much more than missing a carefully crafted sermon – upsetting all around.

Watch yourself my husband cautioned. I was on my way religiously to James North where I attend the life drawing sanctuary once a week – I’ve taken a vow to go as regularly as possible. But naturally once in a while I miss,  like most of us, I slip up now and then.

A pastel drawing from Sunday last May 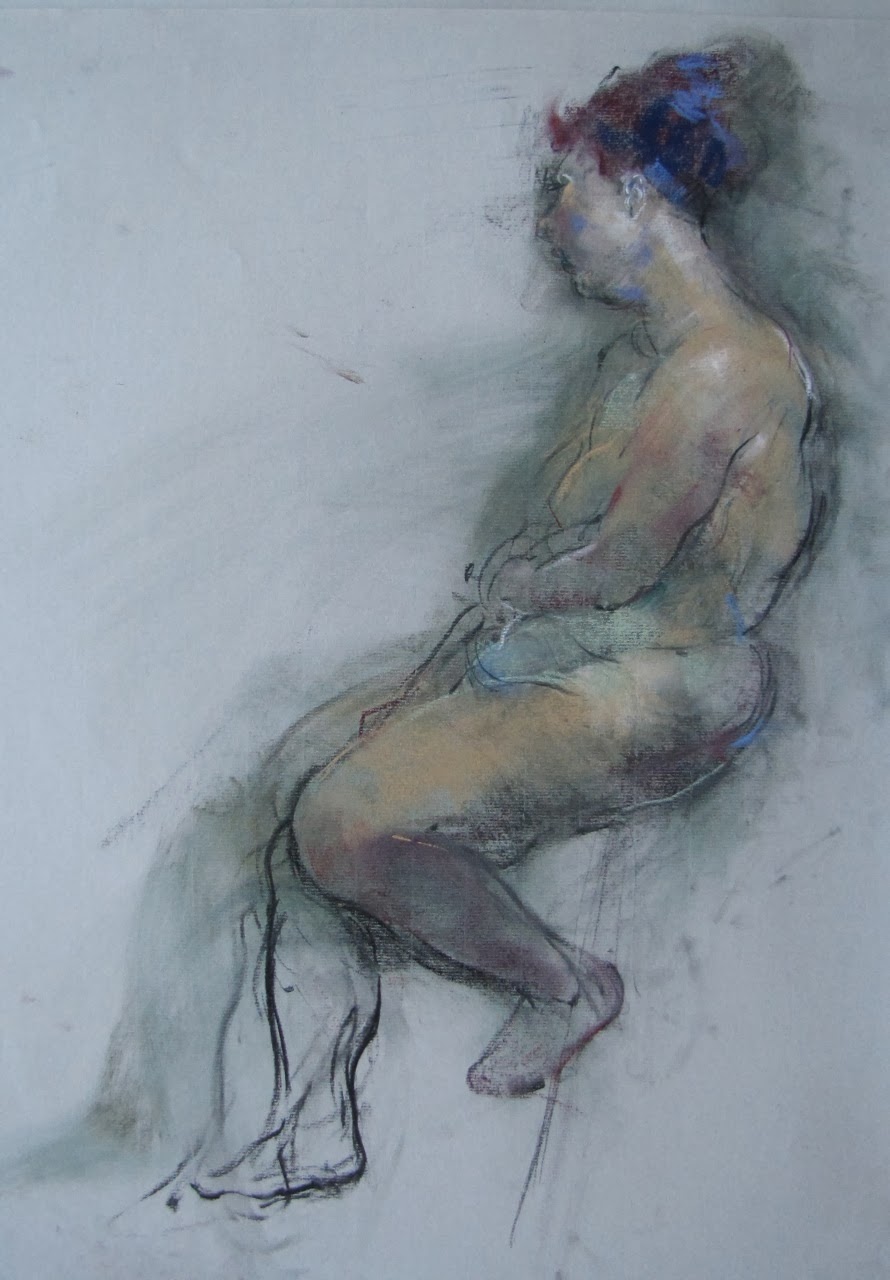 I have a rhythm section in my left ear, a percussive tapping that fades in and out.
Right now it’s at rest. Sometimes it feels as though I have a front row seat at a gig with Gene Krupa and Buddy Rich who I enjoy, find exciting. Or maybe a flamenco dancer with a persistent duende like stamping while I’m trying to sleep. At first this unsolicited drumming entertained me but after awhile its prolonged hunger for attention wore me out, dismayed me. Now after a few weeks of it I’ve become mildly detached  and accepting  as though a neighbor has just dropped by uninvited or unexpectedly for a visit and I’m too polite to say, “please not now, I’m busy” and eventually the visitor gets the idea and leaves.

An  unmade futon with red comforter. 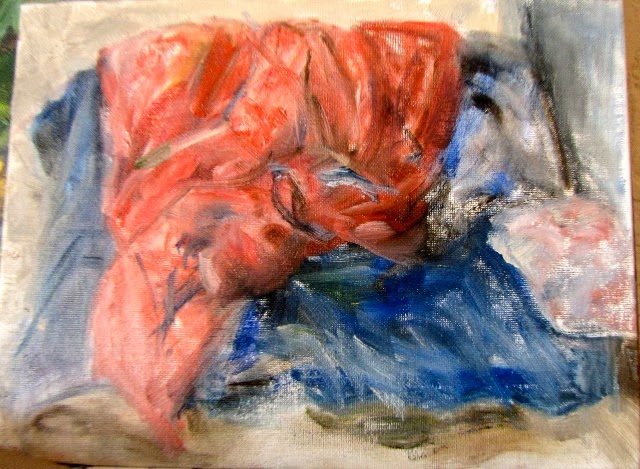 Two years ago, the name of Man Ray re-crossed my radar. How that came about - I had recently watched a fascinating film based on the novel, The Unbearable Lightness of Being by Milan Kundera. There was a memorable scene for me where the doctor’s mistress, an artist, is showing the doctor’s most recent mistress (who has recently developed a relationship with her camera) some photographs from a book on Man Ray, or was it on Man Ray’s wife? There’s quite possibly some misinformation here.  I should rewatch that film when I have a chance. Then I too decided to leaf through some of Man Ray's  extraordinary photographs. 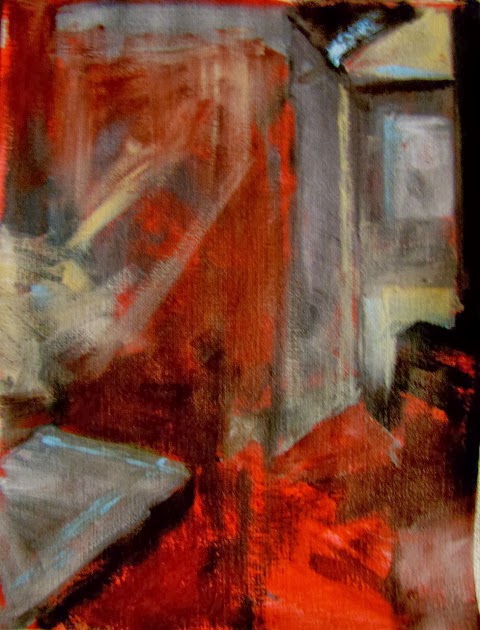 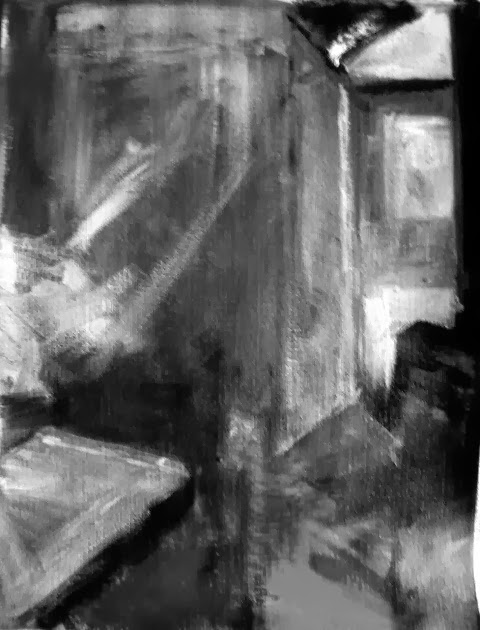