"Now is the time for all good men to come to the aid of the party" and this sort of five finger exercise could  just as easily apply to  still life’s that lean against anonymous walls when they could just as easily make a brief appearance on one’s blog. I did this still life almost two  years ago – the set up was against a wall in my bedroom which I left to its own devices for several weeks after I stopped painting it. It is therefore  neither finished nor unfinished.
A friend brought the bowl from Italy, the pitcher is an historical replication of a certain kind of pottery from the Knox Allbright  in Buffalo (vague),  the vase once held beautiful plum tree blossoms, the blue bottle once contained oil, the grater once grated lemon zest and the barely decipherable object in front of the grater was a drain stopper for a bathroom sink. 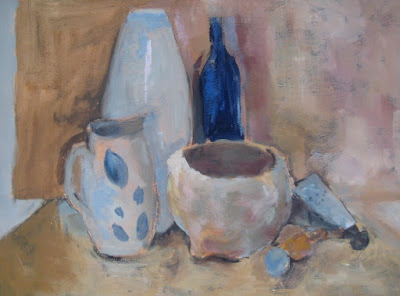 This drawing dates back to fall last year when we were privileged on a rare occasion to draw from a wonderful male model.  The second drawing is of a kneeling woman – a short pose and quasi anatomical to help me understand the pose better.
click to enlarge 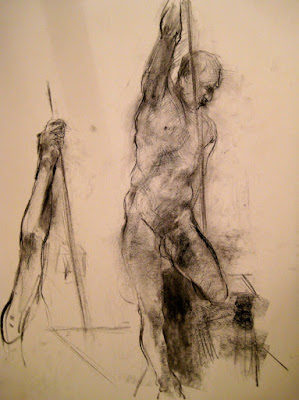 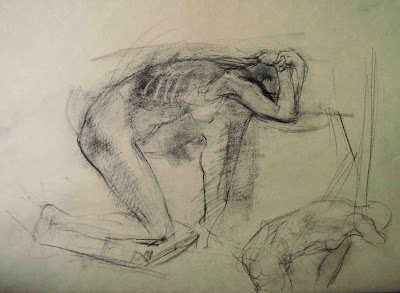 Our last night  at our cottage was cold and our pajamas felt damp from all the rain. I tried to record the thunder storm but missed the loudest clap which seemed alarmingly close to us. We kept congratulating ourselves for staying an extra day and not venturing home in the downpour. I told the owner I wanted to come back but that he’d have to show us how to light the wood burning stove.  And he said it would give him pleasure to do that.
Three separate drawings but pretty much from the same point of view, with just slight variation. 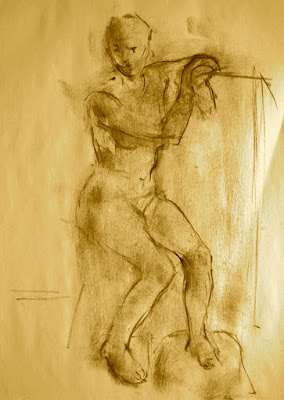 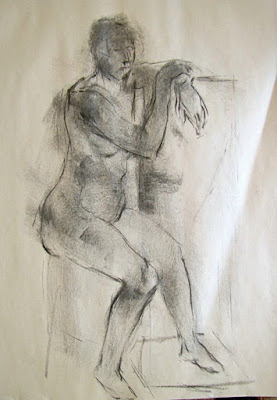 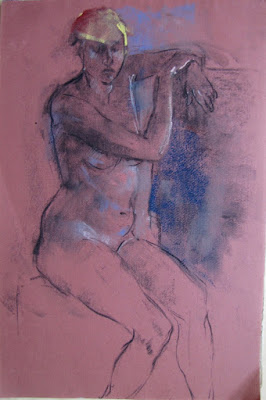 A woman on a cushion

I have a vague recollection of the model talking about a minor personality clash she was having with her pregnant cat or dog – or was it her daughter or was she complaining about her husband – whatever it was, she told it well – I do remember her commenting on her pose that it was very difficult to hold because her feet had a tendency to slide forward – yet she didn’t betray the slightest discomfort in her expression. 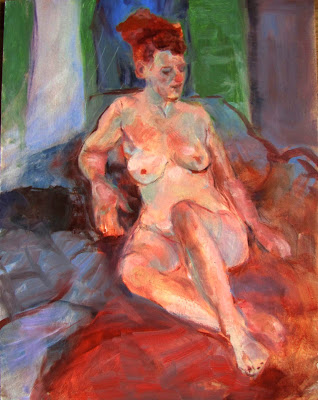 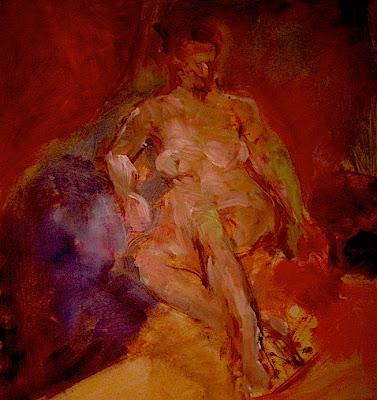 The studio where we draw above the Portuguese pool hall is pleasantly air-conditioned. Alan gave me a brand new eraser because I'd forgotten mine - Maureen gave me a lovely soft carbon pencil to try and during the break, Markus passed around strawberry, yogurt candies. They are an accomplished, dedicated group of drawers - there is atmosphere.

When I left to go to my car the, the intersection at James and Mulberry was blocked by an old world Portuguese religious procession, with a fantastic brass band and individuals carrying banners and incense shakers. It only lasted fifteen or twenty minutes but I was mesmerized by the music and their faces! 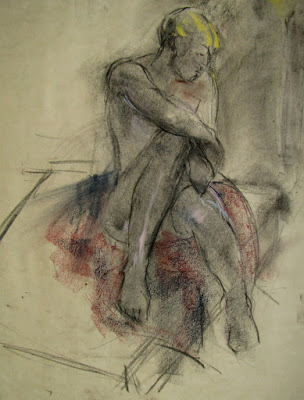 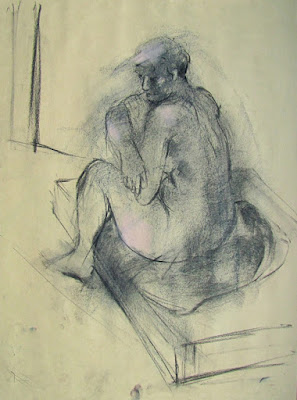