I  left these drawings in my basement which is generally dry but with humidity  they got a bit water damaged, so I decided to photograph them. 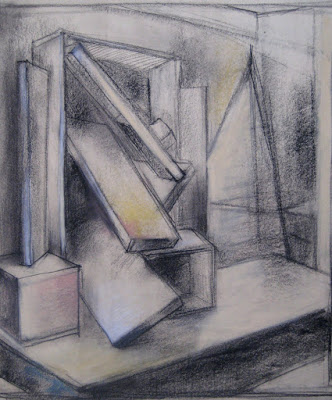 Life is a balancing act and so is still life,  movement versus stability and always the possibility of movement within stability -  even in the case of  still life where inanimate objects seem to rest unperturbed for eternity. The best we can hope for with still life as with life as with art, is to arrest the ravages of time – to preserve the celebration of the moment or moments – keeping in mind that the eye lacks the shutter speed of a leica. 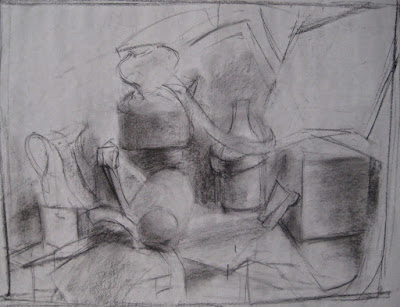 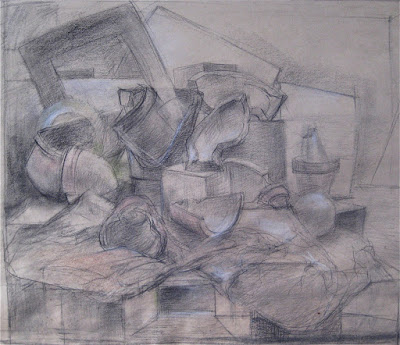 This last Wednesday, I arrived late at 270 Sherman North expecting to suffer as I had the previous time. Wrong! So much for expectations. There were more people (seven including myself),  more light, and it was luxuriously warm. Also I underestimated the space – I would say it was easily the size of a football stadium. I was also wrong about windows. There were rows of huge frosted windows all the way around the open space on all four walls.

But there was no water in the women’s toilet, just in the men’s. that’s because without something amiss we wouldn’t feel at home. 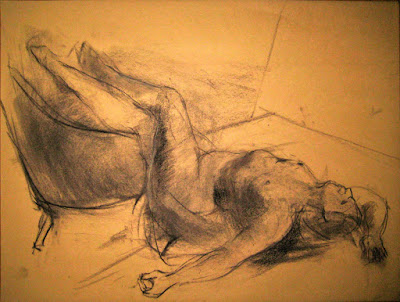 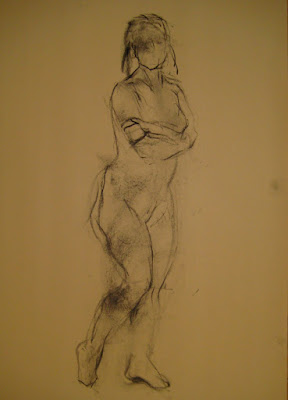 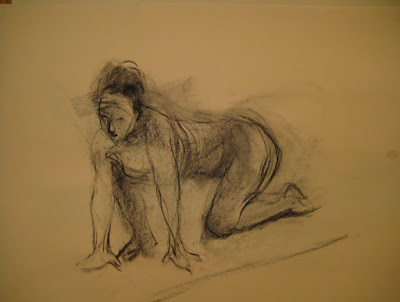 5 or 10 minutes on manilla, charcoal 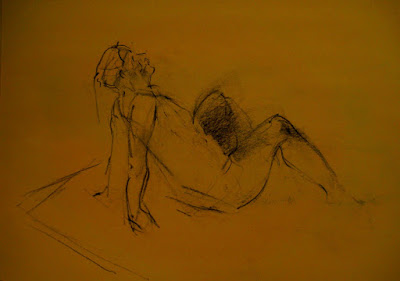 Today I thought it would be a good thing to post a drawing or two since there are so many lying around.

Earlier in the day I'd  prepared a beef stew in my slow cooker and then forgot to  plug it in. I was sure I smelled something good but when I went over to touch it, two and a half hours later it was stone cold. Well we’ll just eat a bit later that’s all – maybe nine, ten o’clock. And if I get hungry before then, I'll drink a glass of wine and nibble. 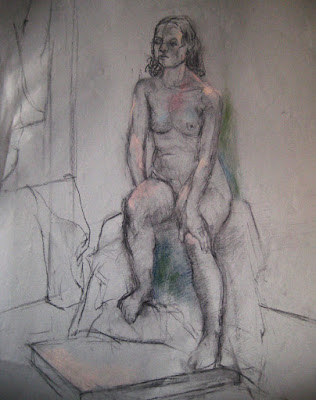 Charcoal and carbon pencil on Ingres paper, 20" by 26" duration approx 50 min. - last spring in the loft at DVSA - open session 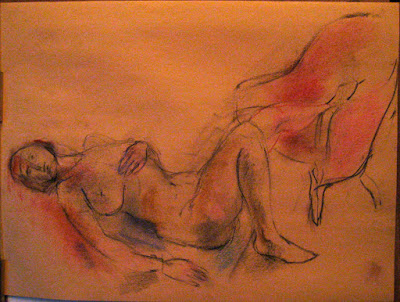 Hamilton is starting to have more opportunities to draw from life. Yesterday I drew at an artist’s studio on James North – we shared the cost of the model it was cheap. The model was terrific. Her poses ranged in length from 2 to 5 to 10 milnutes. .Her  poses were challenging and her movement fluid. I'l post something from that session in a day or two.

Wednesday night I’ll draw at 270 Sherman North, again. The building is owned by 270 Sherman North (a group of engineers)  and the Imperial Cotton Centre. Artists are able to rent studios there and there is quite a turnover. Twice a month someone – maybe the engineers, foots the cost of the model and anyone can drop by to draw – 3rd floor. The lighting though is barely adequate. I was there for the first time in mid December. The space is literally cavernous. It was at night and I didn’t see any windows.  I estimated there was easily 20,000 square feet of open space and it was so cold, I  suggested to the model that she not disrobe. However one of the drawers got hold of a couple of small heaters and we proceeded. Actually there were only three of us drawing and occasionally the building manager would walk by staring straight ahead looking neither to the left or right. Bizarre. The model was a little freaked out by this to say the least.

This coming Saturday morning begins 5 weeks of open drawing sessions in the loft at DVSA in Dundas. I’ll go to that. 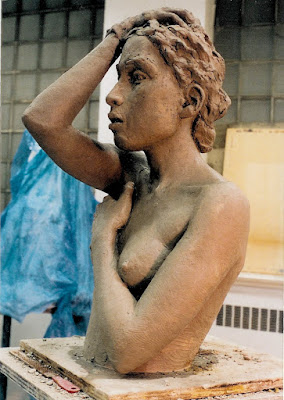 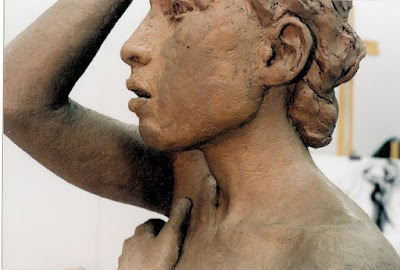 Clay, Life size portrait of Jenny before it was cast, from the Sherman St studio.

I began this sculpture simply as a demonstration of a head for a friend's students using my daughter as  subject. She was in high school at the time. Later in my studio I gradually extended the sculpture to include more of the body but due to the limitations of the armature I was forced to restrict the pose and improvise as best I could. My plan is to rework another variation of this pose, turning and tilting the head into the raised arm to give movement. and perhaps reposition the upper arm - also allowing room also for a base. 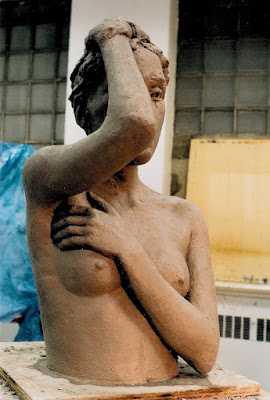 This time of year I remember a truly great melody composed by Harold Arlen, lyrics by Johny Mercer. Good really for any occasion but very appropriate for our 2010 New Year:

You've got to accentuate the positive

And latch on to the affirmative

You've got to spread joy up to the maximum

Bring gloom down to the minimum

Liable to walk upon the scene

To illustrate my last remark

Jonah in the whale, Noah in the ark

What did they do just when everything looked so dark?

("And latch on to the affirmative")

Don't mess with Mister In-Between (No!)

(Ya got to spread joy up to the maximum)

(Bring gloom down to the minimum)

(Liable to walk upon the scene)

I've heard it sung by Ella Fitzgerald, Bing Crosby and the Andrew Sisters,  Al Jarreau - all  great and fun to dance to.

My immediate agenda this new year is to replenish my clay. Tomorrow or Monday - a trip to near by Oakville Pottery to buy some nice red clay, not too soft, not too hard, not too sticky. It sounds a bit like porridge perhaps.