landscape and the unexpected 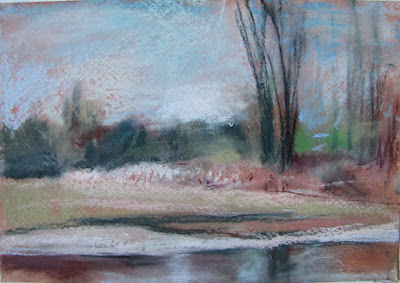 pastel 8 x 11 Spencer Creek - Tuesday, April 20 2010
I spent two afternoons last week at Christie conservation area,  which is where the Spencer Creek runs - off Middleton Road between hwy’s 8  & 5 on the escarpment above Dundas. Both were sparkling, idyllic, sunny days.
But Tuesday was a bit of a shock. When I got home around 4:30 there was no David to greet me. He was at a fire on our street one block to the west of us. It was the city architect’s cottage, the fire started in the huge addition he had just built to the back  of his house. 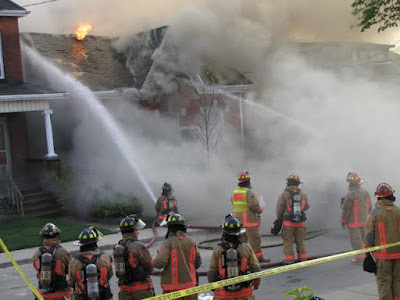 The architect's cottage on Stanley Ave just west of us, Tuesday April 2010
The consensus was that the fire likely started around four, just half an hour before I got home. Everyone was in disbelief. The librarian at Locke library on the corner of our street said she heard sirens and thought dismissively, hmm you don’t often hear sirens on Locke street. It never occurred to her to make the connection that the fire could be  in our neighborhood!
Another woman a few houses down, said she smelled smoke but thought maybe someone’s barbecue had caught on fire. At five I walked over to see for myself.  Flames could be seen through billowing, acrid,  smoke on the cottage roof. The local CH news was there and people were snapping pictures with their cell phones. Nothing in the house was salvageable but the firemen were at least able to prevent the fire from spreading to the houses on either side. And mercifully the family was safe - thank god for that! Still, what can I say - it was horrible.
Posted by cohen labelle at 11:02 PM 13 comments: 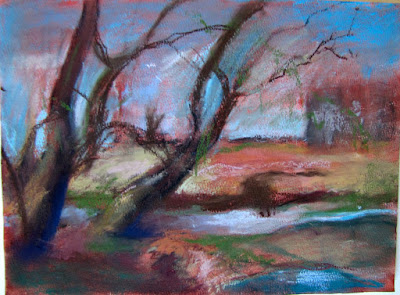 On Tuesday I met our landscape group at Andy’s farm off 4th concession. I was glad I wore boots. The place where I climbed over the roadside fence to set up my easel was muddy and wet in spots. There was a long row of weeping willows trees beside the bank and growing  right in a system of shallow flowing streams. I was late getting there so I didn’t do much exploring. But it’s a very old idyllic farm beautifully cultivated, comparable  according to  another Andy to the south of England. This farm still has twenty or so sheep who go wading in the streams, but Andy who is now retired has sold most of his flock off. When I arrive two biggish dogs greeted me and the more hyper active black dog is thrilled to be jumping in and out of the streams constantly for the three hours that I was there – which is nice because if I were alone he/she would keep me company.
Posted by cohen labelle at 6:03 PM 4 comments: 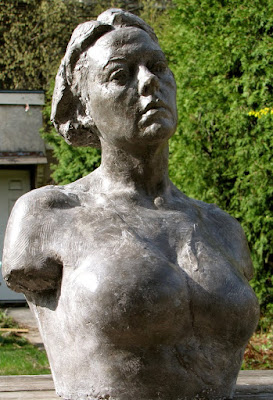 portrait of Lita life size - ciment fondu
click on image to enlarge
This is a portrait of the woman who taught my daughter voice for several years, before she went to Montreal. She herself is a fantastic singer of Schubert, Mozart, Straus, Mahler – you name it.
There is no patina on this particular cast. I never got around to doing it. Maybe one day. 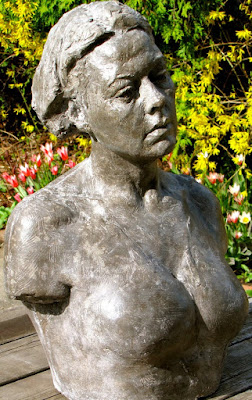 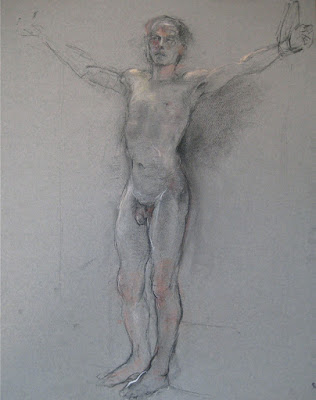 colored chalk 18 x 24 Fabriano paper
Marcia Cohen LaBelle ©2010
This past Sunday, the theme with our male model was – aha,  you guessed it, a studio crucifixion with wrist straps,  as my husband, David,  aptly put it – a crucifixion on the ground. One of the drawers saw the opportunity and seized it, he’d been thinking about it all week. So he announced it to us  apologetically but with quiet determination and excitement as we gathered this sunny Sunday afternoon,  his intention – and we all passively, graciously acquiesced, including the model. So while the better part of the population young and old were hunting chocolate Easter eggs – this is what I spent the better part of three hours doing - drawing with a theme.
Tedious but fun because Alan brought freshly baked cookies that his wife Roseanne  made. I ate two.
Then at 4 o’clock,  the men down below in the pool hall bar, chased us out. They wanted to lock up the building so they could go home for  Easter dinner.
Posted by cohen labelle at 2:08 PM 7 comments: