state of siege or no picnic

George, balanced solely on his haunches held this pose for nearly 20 minutes. I don’t know why I called it state of siege - I could have called it marooned on solid ground or resistance or endurance or persistence or suspended animation or tipping point or god knows what. 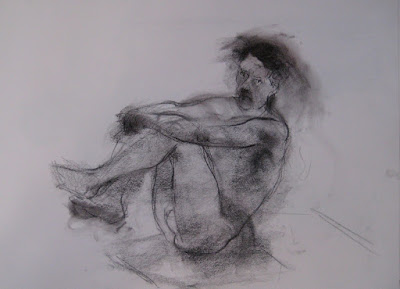 vine and compressed charcoal on bond or cartridge - 18" x 24"


Perhaps I was thinking of Toronto this weekend and the uncharacteristic unleashing of vandalism that occurred outside the G20 security zone during what was primarily a peaceful demonstration  of peace activists numbering as many as 10,000. There were representatives on behalf of Oxfam, native aboriginal groups, the Stephen Lewis Foundation, Save the Mothers in Uganda, etc - and as well a small malicious group of anonymously dressed persons in black hoodies known as black bloc.
It’s conjectured that the so called black bloc -  anarchists, have no commonality, they could be anyone and everyone including  some agent provacateurs planted there by the police themselves.
See articles:
http://gu.com/p/2txz5  http://gu.com/p/2t2xq

Afterthoughts:
I was in Toronto on Wednesday  and cycled through a seemingly endless corridor of high chain link fence making my way west to where my daughter lived. I passed massive groupings of police everywhere, many on bicycles looking like fun loving boys and girls, scouts assembled for a picnic.
I stayed over on Thursday with the intention of going to Robarts a huge U of T library for a book on Isaak Levitan. The library was closed – the entire university was closed! I barely made it to the AGO in time  knowing that it too would be shut down Friday afternoon until the following Tuesday. Then I headed back to Hamilton. That was wise because on Saturday Union Station was shut down and I would have been marooned. Marooned!?
Yesterday I watched a video by an independent jounnalist on Huffington Post,  Brandon Jourdan, I was immediately struck by how threatening and intimidating the police looked in their riot gear - visor shields and weaponry.  That was a transformation from what I saw when I was there on Wednesday. No picnic indeed. All that securigard, the fence, the 20, 000 police – the cost – a mere one billion.
Couldn’t the esteemed leaders have met, conferred, convened  through the advanced high tech of teleconferencing, skype? Too modest? But think of the budget – one billion - they could have saved? $$1B

The sun is just

This is a cliché of course the young man explained to us in beautiful English as we stood in line, waiting for our bus to arrive at Estación Plaza Eliptica to take us to Toledo. He approved the dirty white gardeners hat David was wearing – he elaborated that in Spain they have a saying – the sun is just, it shines with the same cruelty relentlessness or lack of mercy on every one  - so a hat is definitely a good idea. 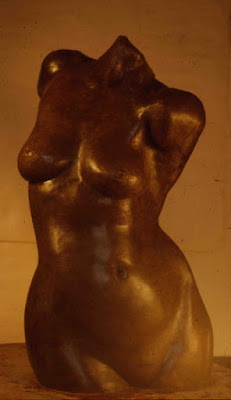 wax torso approximately life size cast first in plaster and then ciment fondu
I worked on this piece for several months when I lived in Toronto, building up the wax over a wood, metal lathe, burlap and plaster core.
The idea for the torso was that of a pivot,  of the body moving around itself as in dance and specifically flamenco. Nevertheless while we were in Spain we didn’t leave ourselves enough time to take in any flamenco or bull fight. I was reading In Our Time by Hemingway while I was there , some of his stories describe the strange obsessive fascination this ancient and cruel ritual had for him.
I hope we can return to the south of Spain in late fall and take in some of what we missed this spring.
But not to complain - the time spent at incredible museums in Madrid and Barcelona swept us away!