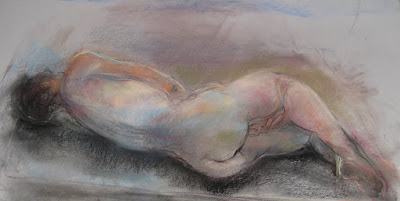 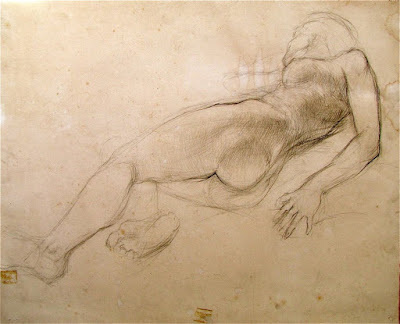 conté on beige printing paper 20"x26" 1990
click on images to enlarge
Resting for the model may not be particularly restful, anymore than it is necessarily restful for the person who is doing the drawing.
But there is definitely a state between waking and sleeping that takes a resting position. Yet, it may be just a useful conceit to establish the illusion of rest that may be in fact, a complete lie - After a short time the model may have been excruciatingly uncomfortable in maintaing a pose simply to satisfy the whim of the capricious drawer.
Posted by cohen labelle at 3:51 PM 8 comments: 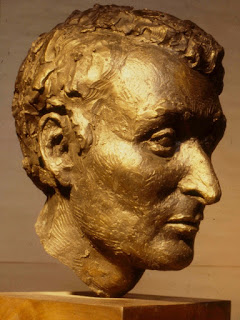 Some years ago - I refuse to say how many -  my brother, an engineer, decided to move to Israel to live and work. A week before he left I asked him if I could do his portrait. He sat for me for two hours each day religiously for just under a week before he caught his flight.

He stayed in Israel for three years working at a hospital in Safad where he was to meet his lovely wife and then at the Technion in Haifa. As much as he loved living there after three years he grew home sick and returned to Canada. One of the things he missed most (he said almost apologetically) was winter - the open space and cross country skiing. I think in the final analysis that is what pulled him back. For me I think, the impetus would be in the opposite direction, that is to say I wouldn't miss winter so much - having been land locked for most of my life I could see myself living close to the coast in southern Europe, perhaps Italy or France or Spain -
one dreams of these possibilities.
Posted by cohen labelle at 11:32 PM 6 comments:

At any time of day 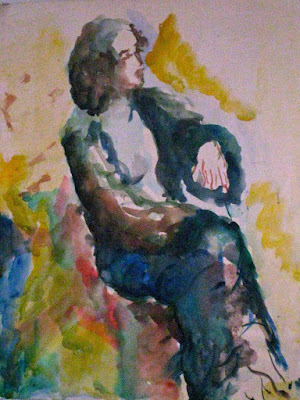 
How much of an inner life can we permit ourselves on blog land without  revealing or exposing some vulnerability that ought to be kept hidden.

But then we can camouflage our feelings by tossing off remarks flippantly or in jest, providing a protective patina - this surely is the art of conversation, small talk - and how assiduously we practise it and how seamlessly it works - we hope.
But most artists try to practise the opposite - i.e. wearing their hearts on their sleeves! I'm all for that - working on it. 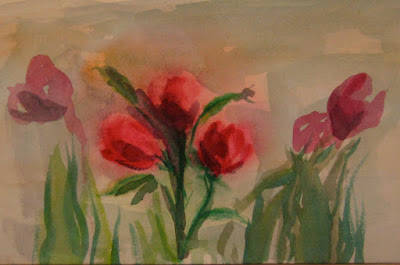 Thank you Barbara Muir for talking me up on your fabulous blog and helping me tame the critic within.
And while I'm at it - happy birthday to you darling Jenny!
Posted by cohen labelle at 1:54 AM 2 comments: 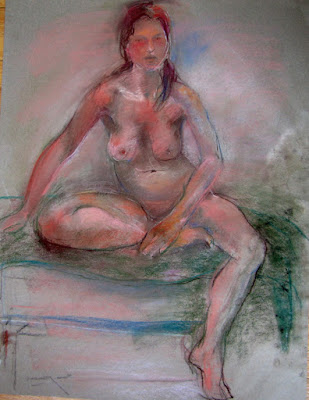 chalk drawing on canson 20"x26"
I did lengths tonight at the community pool – in the slow lane. There were four or five of us hugging the edge or so I thought, trying not to bump into one another. But every so often I would feel myself whacked by the opposite swimmer  usually on my back, sometimes on my arm or leg, hardly conducive to the euphoric state I try to achieve while in the water.
Finally I looked to see who it was. It was a tall, slender man with very long arms doing a back stroke, a breast stroke and occasionally a front crawl. And I noticed mildly outraged, he was not hugging the edge, following pool etiquette – rather he was practically hogging the whole of our narrow lane to himself, smack in the middle of it!
When I spoke to him, I said I think you just hit me as you passed (as he had just done - he didn't deny it) - I suggested politely but firmly that he could move over a little. He apologized but refused to move over because then his arms would hit the wall but he promised to be ‘more careful’. “I guess it’s because” he said, “I’m faster than you” – which apparently was true. So I suggested that he swim in the faster, ‘medium slow’ lane next to us, but he refused saying he’d been swimming in this lane for years.  And this was where he belonged, in the slow lane.
Posted by cohen labelle at 1:15 AM 7 comments:

two back poses and re:notation 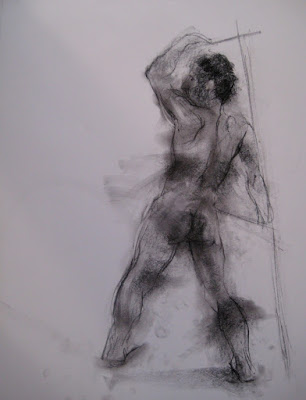 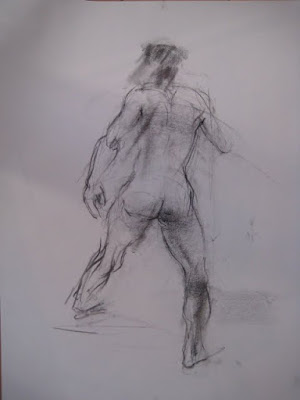 With regards to the previous post – I find it hard to be satisfied with the acidity of the color shown - in spite of   the miraculous capabilities of Canon, I'm still somewhat inept at manipulating its settings at this point in time. 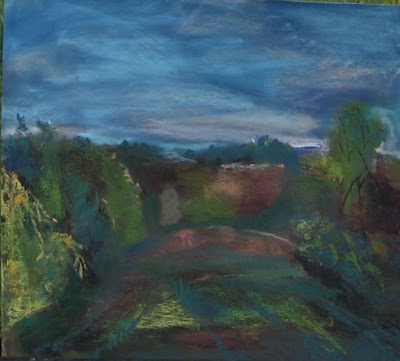 I found this photograph that I took at the actual place where I did this painting, seen in the previous post - but then for some reason  overlooked it. It represents much better the real colors – I think a fair facsimile or at least a reasonable compromise.
Posted by cohen labelle at 1:24 AM 2 comments: 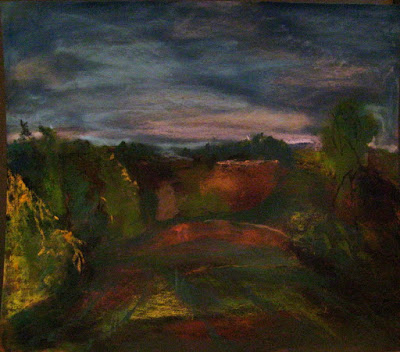 "Nothing exists unless it is notated, not even the smell of wind, much less the sound of pastorales. I remember sounds with the eye. Even love and lovemaking are unreal except through a recollection which grows faint and disappears unless I print it here.  I can’t “just live” but must be aware of being aware."

I find that quote touching and at the same time almost hilarious. In other words the raw material of our moment to moment existence is all we have with which to coax, pummel and fashion  something  into something we hope to be of permanent and lasting value.
Posted by cohen labelle at 1:10 AM 9 comments: