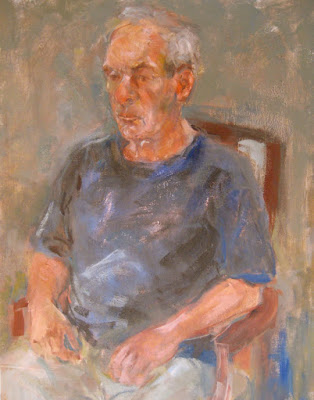 oil 18 x24 on masonite - unfinished
click image to enlarge
Approximately three or four years ago, I lose track of time, I began a drawing of David in my studio at the back of our house where I have a north light. It was strictly impromptu. Could he sit, would he sit, could he read, could he sit still – what palette should I use? Should we continue this at a later time (we never did) You know how husbands are and wives are after several years of marriage  - intimacy – all kinds of looks transpire between us. Any way I have this piece – an hour or two of work – an afternoon from a few summers ago. Plans now are to do a study in clay, more drawings – but I’ll let him read, we’ll chat – maybe a sort of meandering monologue from him, that would be good.
Posted by cohen labelle at 5:48 PM 7 comments:

cast black resin with filler 36"
click to enlarge
My friend, Gordon scanned some slides for me yesterday of some work I did when I lived in Toronto.
Ellen, also known as Woody is the model here. The quality of the photograph is abysmal – I’ve tried to lighten it in the next image.


Ellen was a great model, a natural - and  became the full time resident model at the University of Guelph. John Fillion used to give us both a lift two or three times a week, which was great for me because I got to see my parents.


During the commute John smoked Lucky Strikes (Luckies) and Ellen smoked Pall Malls. The air would thicken and my eyes would water until,  by the end of the trip,  they were bleary and red. Whatever conversation between us was carried on between sips of coffee from styrofoam cups over a loud, steady stream of country rhythm and blues.
I remember Ellen as a Miles Davis fan. She made regular trips to Massey Hall when he came to town, often waiting patiently and uncomplainingly for up to two to three hours before the legendary Miles was ready to perform.

She always said he was great and the wait was worth it!
Posted by cohen labelle at 10:20 PM 12 comments: 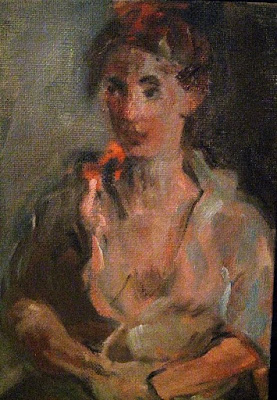 
Back in November of 2009, I was beginning to paint with oils which I hope to resume.
This painting is a loose copy of an 8 x 10 black and white reproduction of a portrait from his book: Painting the Human Figure by Moses Soyer. (brother of Raphael Soyer. This is an early ‘how to’ book, there’s a sweetness about the book – very charming – it was recommended to me when I lived in Toronto by a painter friend.
The arms and hands get short schrift in terms of accuracy. I wasn’t aiming for accuracy I was looking to get something down quickly. I have a feeling that Soyer wasn’t overly concerned with precision either or maybe he had a bit of astigmatism like me as did my father – these visual impediments tend to get handed down. But I’m not being fair, Soyer was actually an excellent draughts-man and very well trained.
Soyer is probably someone I would have enjoyed knowing. His people tend to be sad and soulful looking. If his photographs are any indication he was probably that way himself. Considering that he weathered  having to flee from Russia with his parents, then the great depression and the second world war, there’s ample reason for his world weary look.
I am comfortable with people like that I feel protective towards them.
Yet I’m confident that he had a genuine sense of humor – the kind we all develop in order to survive.
Posted by cohen labelle at 12:13 AM 4 comments:

once more green and red 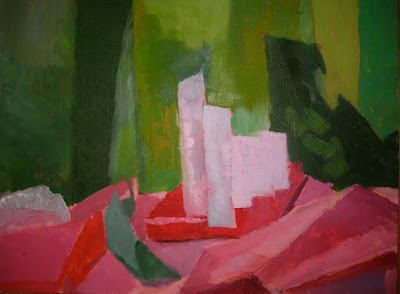 9 x 12 oil - set up of construction paper, 2009
Well it is St. Patrick’s Day. Furthermore I like green, I used to look good in green – had green in my wardrobe a pair of beautiful green boots I bought long ago in Chicago. And a tight fitting, green, sleeveless dress, that even if I could still wear it, it just wouldn’t look the same.
According to that ever growing body of knowledge, science -  green is a primary color – and science is seldom wrong – right?
Posted by cohen labelle at 7:12 PM 7 comments:

The Saint and the Voluptuary 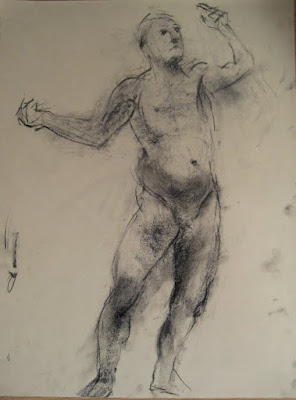 Charcoal 18 x 24 on manilla
This is Alan sermonizing, expostulating as an evangelist. He held this pose for at least a full 15 minutes without blinking. I asked him how he did it. He said he didn't know. It occurs to me therefore that Alan is  a saint. Of course, Alan also draws and appreciates the dynamics of a gesture. 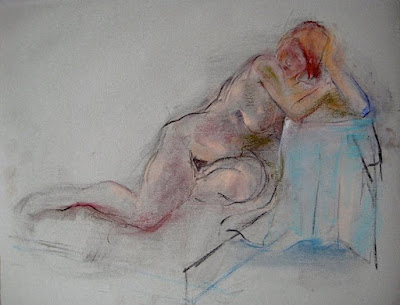 Colored chalk on Ingres paper 18 x 24
Vivian is also a saint. She is taking note of what Alan has to say but prefers to reflect on her own inner conception of salvation. She is also a voluptuary which makes her exquisite to draw.
Posted by cohen labelle at 4:33 PM 6 comments: 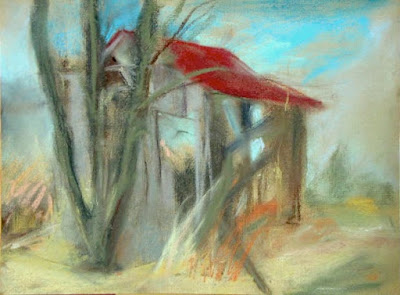 The ruin of a barn on the Kozawyk farm - pastel sketch, 9x12
The ground was soft today and squishy in places at the Kozawyk farm. I squatted at my easel without a coat or fleecy on. I was on a bit of an incline looking up and kept tipping over from time to time. Then I clumsily spilled some coffee into my tray of pastels, not all of it, thankfully,  there was still some left to drink.
Pat, the artist who lives on the farm and her dog Meg don’t mind if I make a return visit to have a go at the weeping willow, now a mature tree that her mother planted.  I want to draw the tree before it buds – with its limbs fully exposed.
Tonight I went to the Sky Dragon with David to hear him give a talk on the American novelist, Nicholson Baker to a group of local poets, specifically on his novel, The Anthologist. This led him to talk about all the poets who rhyme and those who don’t.  In connection with this he talked about Philip Larkin’s wonderful anthology, The Oxford Book of Twentieth Century English Verse. Nicholson Baker is also a literary critic, a social critic and a journalist. David has been having a go  at almost everything he’s written for the last two months. I came away thinking what a sweet, thoughtful,  erudite man my husband is. And a whole lot more.
Posted by cohen labelle at 10:47 PM No comments: 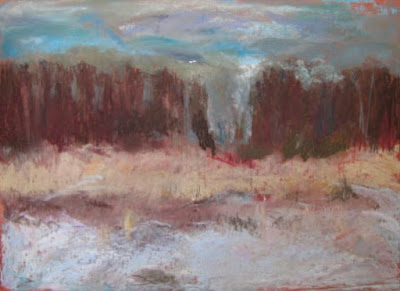 Last Tuesday at  Kozawyck's farm,  sketch - pastel 10x14
This Tuesday there won't be much left of the snow, maybe a snippet here and there.

We’ve had a succession of sparkling days. Today is unbelievable.
Yesterday I climbed Snake Road on my bicycle with my husband David. When I reached the top I felt unpleasantly warm and overdressed and unzipped two layers. Now we were on the escarpment in Waterdown. I thought it would be nice to show him the Kozawyck farm off Center Road but it was oppressively busy with cars so we turned around and did the usual loop – about 50 km on country roads, past Connan’s Nurseries,  stopping at a convenience store for apple juice just before hwy 6, one of our busiest highways. We crossed it into Milgrove. – cycling into a strong headwind and crosswind – the homestretch seemed endless. Also sections of road were submerged under water from the melting snow. Now David felt chilly and I began to feel strain in my wrists and derriere.  It was a relief to turn on to Brock Road at Greensville and then descend the very steep hill (hwy 8) into the valley town of Dundas. We stopped at the ubiquitous Tim Hortons for coffee and a sandwich. Half an hour later we were home, by this time dark. I was the first to jump into a hot bath. Took an ibuprofen and flopped onto bed for a luxurious nap. Bliss.
Posted by cohen labelle at 8:55 PM 6 comments: 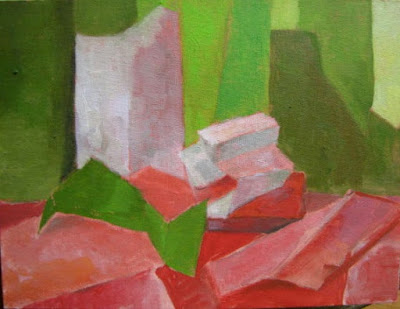 Still Life with construction paper 9x12 - oil
winter 2009
Last winter I entertained myself playing with red and green construction paper on my dining room table.  I bought the paper at the nearby dollar store. My dining room has a southern exposure but as it was mid afternoon and winter, I wound up turning on the overhead very old fashioned chandelier that my husband longs to update. I limited my palette to red and green and titanium white. I kept rearranging the red and green paper as the back drop and folded some white paper giving it center stage. This was fun to do and not the least bit rigorous – to draw the set up and then to paint it.
Posted by cohen labelle at 10:14 PM 12 comments: