A Room of One's Own

This week I gave myself a long overdue history lesson. I learned that a secular left wing German socialist, Clara Zetkin – nee Eisler, staged the very first  International Women’s  Day one hundred years ago,  March 19, 1911 –  It was her brain child.
Until I’d read Stephanie Nolen’s excellent piece earlier this week in the Globe and Mail, I was oblivious to that. Nolen’s excellent article also provided a real tonic to understanding the status of women from a global perspective - highly recommended:
http://www.theglobeandmail.com/news/world/in-much-of-the-world-gains-in-womens-rights-elude-a-silent-majority/article1933117/
Zetkin also worked and became close friends with another outstanding leader in the struggle for  justice and equality for women and workers rights – Rosa Luxemburg who was assassinated in 1919. Bertolt Brecht wrote Luxemburg’s epitaph and in 1928 Kurt Weill set it to music as the Berlin Requiem. Not surprisingly, both women deplored and fought against racism.
In my tangential reading spree I was also shocked to learn, that Leslie Stephen refused to pay for the education of his daughter, Virginia Woolf. While his sons went off to school, Virginia stayed home!  Years later in 1929, she published an impassioned plea for the artistic freedom and the necessity of economic independence for women in her book long essay: A Room of One’s Own. 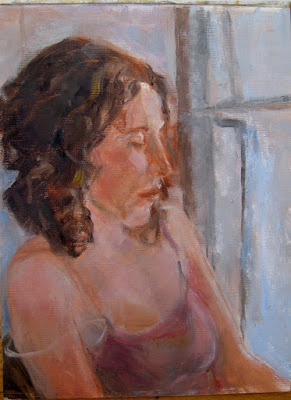 9"x12" oil study on canvas paper
Last Saturday, while attending a gathering of women artists in Ayr at Ayr Space Gallery -IWC -  I met a fascinating artist  Grace Luke  from Nova Scotia, who proudly admits to being 89. As a former music teacher to blind children, she’d titled her painting,  Hope Through Music. Of course music reaches across and can be eloquent where words fail.  We both agreed that in all cultures where fundamentalist religious beliefs prevail, it is incredibly difficult for women to gain equality!
Posted by cohen labelle at 3:13 PM